Welcome to the Pet Newsletter - for those who love animals! Sponsored by a non profit foranimals:  Animals Alone Society of Kindness Services.

Subscribe (top right of right column!) to be Notified of our next Newsletter and Enjoy your stay! Add your comments to the topics so that others may benefit as well!

All About Companion Animals

With the new Holiday season at hand - keep an eye on your pets! Those dangling Christmas ornaments all look like "toys" to both dogs and cats - make sure it's a safe holiday season for all your family members. 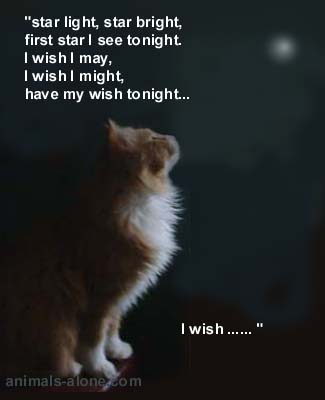 We're starting up the blog again, we've been really busy over the past while.
We've moved a couple of times, had battles with Town Counsel and members of the community who refused to believe that their stray population was out of control and inviting to wildlife.
And while Town Counsel was fully aware of the wildlife entering town, they refused to publicize it because wildlife was their answer to animal control issues.

As some may know, we experienced some major upheavals in a rural farming community who felt that dogs and cats are service animals meant to stay in the barn and take care of mice and coyotes. We tend to disagree, especially with all we'd seen over the first 7 years in function.

Locals felt that because animals are surrendered or found as strays, they should have them for free - to service them - dispensable and replaceable.
Spaying and Neutering was out of the question, because they want them to breed and reproduce, since the coyotes eat most of them.
Again, we disagree with that train of thought, which made things even harder on us - alas, the battle was on - and you know what? They didn't win!

Over the years, some local farmers are now spaying and neutering.
They are realizing that if their service animals no longer desire to mate, they stay closer to the farm site and don't travel.
They realize that inter-breeding is unhealthy and carries disease into their grainaries and barns.
Our adoption rate was extremely poor and as a no kill operation, we had to get creative to get animals into loving homes.
We traveled many miles out of our area and networked with other rescues to reduce our population.
We went elsewhere for a year and proved to ourselves that the problem didn't lie within our business, but with the general concept that animals are "useless" unless they "serve" a purpose.

The purpose we endorse is companionship and we branched out into programs that involved seniors who live alone. This has taken on a new method of helping people and further defines our mission statement - "utilizing the good in animals to benefit the good in people"

As a strong advocate, the incidents we encountered brought my attention to the need for spaying and neutering of companion animals - both dogs and cats.
Through networking, the reality of companion animal population came to light - millions and millions of healthy, loving, playful animals die - simply because they were born and were surrendered or abandoned.
Behind every animal that roams the streets or ends up in an Animal Control facility or Rescue, is because there is a relationship with a human - that failed.

Over the years, I have seen a lot of things that have made me smile and made me cry - this is what will be shared, in the newsletter from here on in - along with other animal related topics.

So subscribe to the journal and if you have a pet story you care to share - PLEASE add it to the comment area - would love to hear it!
till next time
Heather
Animals-Alone.Com

With Christmas behind us, we want to wish all visitors the very best in the New Year.
Please remember that if you have pets that go outdoors, if it's too cold out for people, it's even colder for  your climitized pets - so remember keep them outdoors no longer than 5 minutes in very cold weather and a little longer (10-15 minutes) in -10 weather!
All the very best to all and hug your furbaby - you'll both be better off for it!
bye for now
visit us online and care and share with animals alone
http://www.animals-alone.com/map.html

With the New Year underway, the newsletter will be taking on changes concerning the promotions of animal related topics and most of all - AASK Shelter and Rescue. We have an entire new product line for all Pet Lovers and their four legged loves.

This year, we begin with a suttle approach to Animal Abuse via our newest designs that get the word out there with compassion.

"Protect and Respect" is our design that we hope animal lovers will wear or use with pride and help promote the cause... there's a variety of products available for you to choose from with this design! Shoppers can now choose the product wanted as opposed to us picking a specific product. Lotsa choices this year!

Spreadshirt Market Place Product
Owned by a Dog - Drop Off

We've got Bumper Stickers lined up and all kinds of goodies that promote the health and wellness of animals and people - not to mention, helps us support our cause.

With New Years around the corner and Christmas behind us, I'm hoping that folks remember the plight of our furry friends and deter from purchases of real fur and to be especially precautious when labels state that it's faux fur.... brand names like Bloomingdale's, Neiman Marcus, Lord & Taylor, Dillard's, Saks Fifth Avenue and Yoox.com—have not addressed this consumer deception and continue sales in fur collars and trims, claiming it to be faux fur. Certain jackets sold by these companies with the brand names Burberry, Andrew Marc, Marc New York, Preston & York, Aqua, Ramosport and Adam+Eve were found to be falsely advertised or mislabeled as faux fur.

C'mon now, do you really want to be wearing something that has a trim of REAL Dog or Cat Fur???

Last winter, of 25 fur-trimmed jackets tested by The HSUS, every single one was falsely advertised, falsely labeled, unlabeled or had a combination of these problems. Twenty were identified by laboratory testing as raccoon dog and three as domestic dog.

Raccoon dogs and domestic dogs are both raised for their fur in China—a country with no functioning animal welfare laws, and where investigators have documented animals being skinned alive for their fur. Like many other species, rabbits raised for their fur spend their entire lives in tiny wire cages. Much of the world’s fur is processed in China, where environmental problems associated with the industry are receiving scrutiny - to find out  more - visit the Humane Society's website at http://www.hsus.org/furfree/news/holiday_shoppers_real_fur_as_faux_122007.html

This month's newsletter takes us to a shelter in Leander TX where it's occupants display an active, happy life, until a "forever home" can be found. The clip(s) show a couple of playful residents who - while in their cages, show how shelter life isn't all that bad considering, it is hoped to be temporary!
Visit Leander TX's Humane Society to watch their videos!

Next, here's a Vet Clinic in Camrose Ab. that offers helpful medical tips for those interested in knowing which medicine is right for what ails your pet! By looking through the listing, there is a detailed explanation that serves to understand what is wrong with your pet.... if by looking through the listing, you see a symptom that your pet may have, then perhaps a visit to your vet would be in order. (anyone near Camrose, may want to visit this clinic for a great service!) Visit the Camrose Vet Clinic for detailed health care tips!

Here's one that gave us a good chuckle! Visit at Funny Pets!!

Next, here's a couple of sites for Pet Lovers to join, build/create a page for your pet(s) and enjoy meeting others of like mind!
http://www.petsplaces.com ** http://www.animalattraction.com  ** http://www.i-love-dogs.com

AND... last but least, Do you have animal stories to share? (view last month's entry to read about Beeb's and how she got her dog!) ~ We've started a new site for Blogging Pet Parents!

Add your pet related or animal stories to a new site for Pet Bloggers~ visit us at: http://petbloggers.informe.com

Hundreds of Wolves are about to be shot in cold blood - rather than be protected in the wild.

This month's issue deals with safety tips and other great pet related topics!

* This next link (opens in another window) could not only save your life in a fire, but safe your pet's life too! Learn how to be prepared in case such an unexpected misfortune occurs in your life! Tell others and maybe save a life! Click Here to see what the Fire Safety Counsel defines as safe recourse!

* Have you considered making your own Pet Foods to assure a safer diet for your pet? This next link directs you to a site that is run by Veterinarians and Pet Dieticians who explain the risks and benefits of such a task. Find recipes that are known to be safe and ask questions if you're unsure of something at: Pet Diets.Com!

And here's a picture, one that gets caught on film once in a lifetime - found at Joe-ks.Com

That's all for today! Hope you enjoyed!

Leave your comments and let me know you were here!

Till next time! HH of AASK Services!

This month's newsletter has some fun animal links to visit and check out!!

We'll start with a site that Doggie Parents can certainly relate to! The site's content relates to "bad dog stories" - you know the ones, things they ate, things they knocked over!  Ouch! and more. The Bad Dog Chronicles let Fido and Fifi share their misdeeds with other Net-connected canines and their masters. If you've ever had a furry doggie member of the family that's caused a ruckus or wrecked your belongings, you will have loads of fun reading about other owners' plights. Plus, you (or your dog) can add your own story, complete with damage total - take a read or Join Up for free and share a few stories of your own!

Next on this month's list is a highly active site for you Parents to share and explore with your Children! Smart Tails offers coloring pictures you can print up, tales about pet related animals, interesting fact questions and answers, music, art, chat and interesting products. Hop on over to this colorfully fun, interactive website at Smart Tails.Com

Do You have a Pet Related Website? This resourceful link at http://www.petlinkexchange.com/   is a  banner exchange for Pet related websites!! At Pet Link Exchange, you Submit yours and add another to get your banner some exposure and invite others to visit. Some great sites to visit while there and have a look around! All kinds of great pet related websites!

And - Especially for those who like Pugs, check out this informative site that offers specially made Pug Food! http://www.pugfood.com/

yes,yes,  we know there's a ton of sites out there that are cool pet sites! This is just the beginning of resources and fun sites to bring a smile into your day! We do touch base with some petitions but promise to promote the healthy benefits and gratifying experiences that Animal and PetLovers share!

Till next time -Heather of AASK Services!

p.s. know of some great pet links - add them in a comment so others may enjoy as well!

Bravenet Blog
Get One For Free!
powered by